There's a few things you should know about Pickles ... 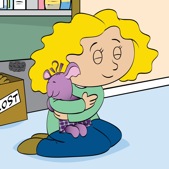 DON'T START WITH ME: I created the Pickles books and animations for my daughter, Erin. I often felt that the things I was discussing with her weren't sinking in. (A combination of my lack of verbal skills, plus a 4 year old's distracted nature!) This seemed a great way to communicate ideas to her. Now, we have something to talk about and develop together.

"Hey Erin! I've just fixed some things on this maths app. Can you test it out for me?"

I posted the first cartoon on YouTube for family, but after 100,000 views and some lovely comments, I figured I might as well try and make Pickles a "thing". Erin is certainly excited about the idea of Pickles being on the bookshelves of the stores she visits. But her big dream is to have a Pickles Ride at Disneyworld! Well ... we can all dream, can't we?


UTTER CHARACTERS: Pickles and Erin came into the world at about the same time, but Pickles has not grown up quite as quickly as Erin. He is a little shorter, he is a little grumpier, and he doesn't always remember the things he has been taught. Pickles can get frustrated easily and is very picky about the things he does and doesn't like. He has a good grasp of what is right and wrong, he just can't quite accept when HE is right or wrong.

Pickles definitely loves Erin though, and she loves him right back. They are always in each other's thoughts and both worry when the other isn't there to share a new situation or experience.

Like most teddies, Pickles doesn't talk to anyone, but you can normally tell what he is thinking or feeling. And, of course, he carries his pad and pencil around with him, just in case there is anything really important to say.

Each Pickles story book is based on something he and Erin have done together in the past. We hope there will be more and more stories for a long time to come!


THE FUTURE: Pickles is breaking out of his story life and doing his best to help Erin elsewhere. He (wink, wink) has developed a maths app so that Erin can practice her numbers. Erin has said that a golf app would be better, so we'll look at that next ...